Side by Side, ATV, Motorcycles & Jeeps Trails 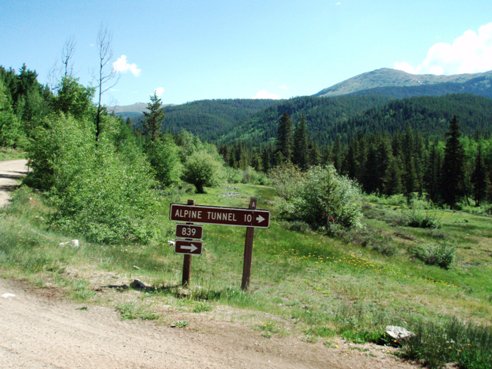 Alpine Tunnel trail starts just outside of the town of Pitkin Colorado but can also be accessed from the Taylor Park area via Cumberland Pass or from St. Elmo via Hancock Pass.  This is most likely the most historical trail in the state that ATV's, Dirt bikes and Jeeps can use.  The trail follows along the old railroad grade that leads to the historic Alpine Tunnel.  Besides having steep drop-offs, the trail itself is fairly easy.

One of two water tanks along the trail that once was used to refill the water tanks of steam engine trains. This tank has been restored by the help of volunteers. Just imagine all of the men it took to get an old steam engine up and over these mountains. 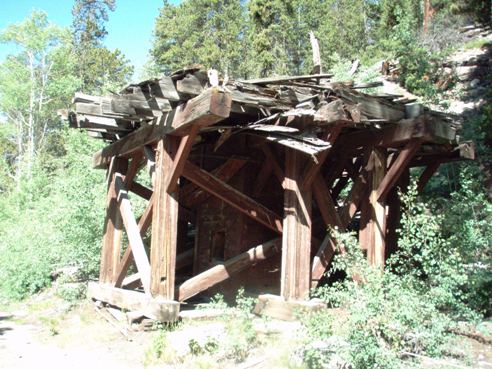 This is what time does to things. Unfortunately this tank was not lucky enough to get the care the other one received and was not restored. There are many things as trail riders that we take for granted on our trips. Do you want to help save history like this? Or maybe you have seen your favorite trail deteriorate over time. At some time and volunteer, I guarantee you will not regret it. Volunteering can be one of the most rewarding things in life. If you have never done it, try it, one weekend will not kill you. You will likely meet many new friends to share future adventures with.

Guide to Colorado Backroad and 4 Wheel Drive Trails, Includes Maps and Direction for this Trail 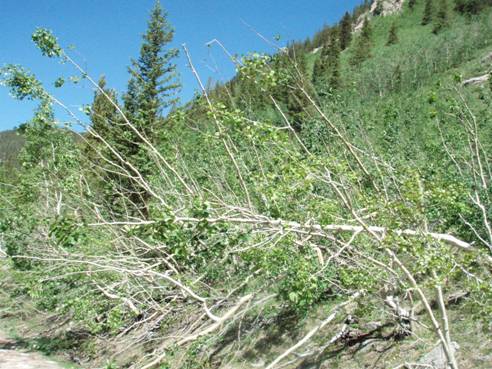 One of several areas along the Alpine Tunnel trail where trees have been damaged by snow avalanches. It is just another reminder of how difficult life was along these high elevation railroads during the winter and how difficult it was to keep the line open. 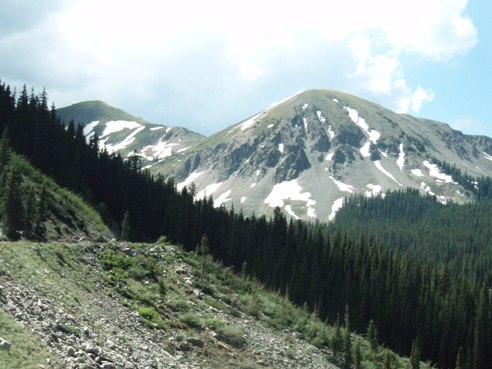 There are great views all along the trail.  You can connect this trail with Cumberland Pass, Hancock Pass, and Tin Cup Pass to make a day long loop.  Be aware that snow can block these high passes well into the summer.  I was there the week of the 4th of July and the passes were still not passable. 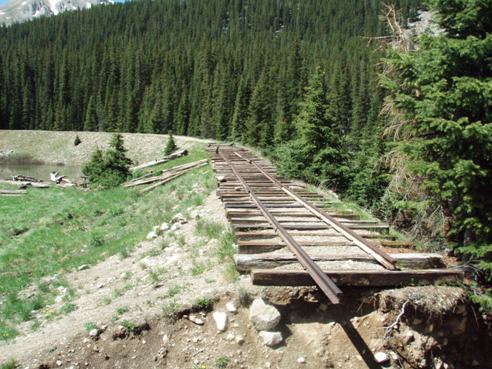 All that is left of the Sherrod Loop Town Site. Many of these old site were like matches, they quickly flamed up only to die right out. 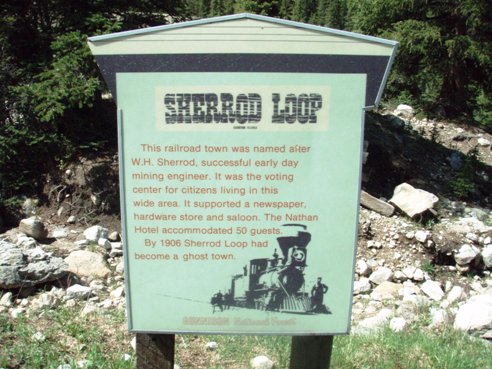 Sign Reads, "This railroad town named after W.H. Sherrod, successful early day mining engineer. It was the voting center for citizens living in this wide area. It supported a newspaper, hardware store and saloon. The Nathan Hotel accommodated 50guests. By 1906 Sherrod Loop had become a ghost town." 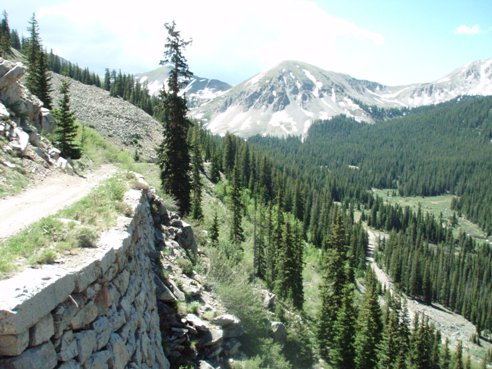 The three miles of trail that passes the "Palisades" to the Alpine Tunnel is considered the most difficult railroad construction project per foot in history. The rocks used to build this wall are huge and building it was a monumental task. Now days crews would use hydraulic machines to do the lifting, then it was only man power and animal power with the occasional steam power. 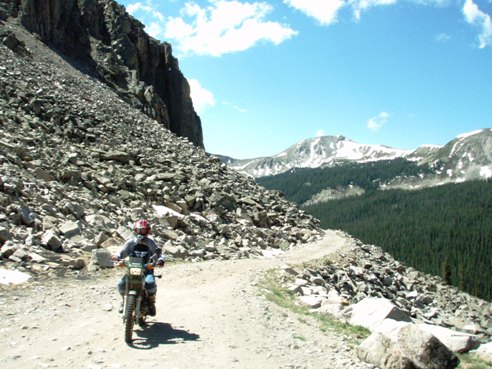 Nearing the end of the Palisades. On one of my visits to this area I talked with a man who had ridden his recumbent bike all the way to the top of the trail and the old train station. 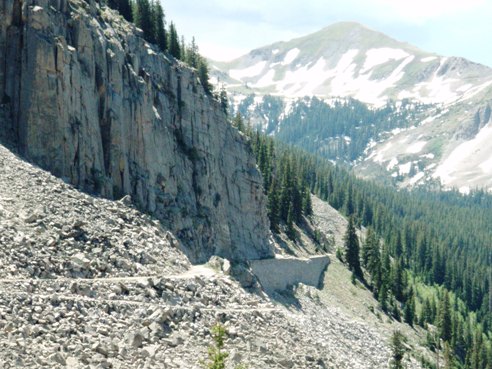 This view offers a good view of the rock cliff the workers had to work on and also all of the boulders they had to move around and shape into a railroad bed. 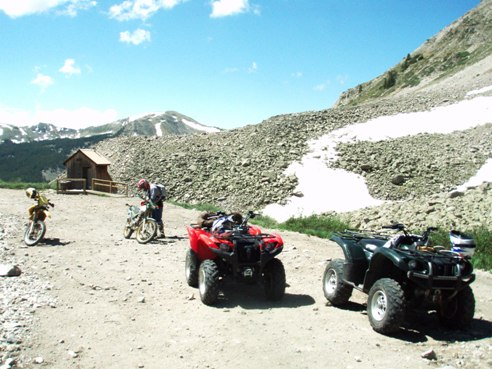 There is a gate that blocks UTVs and dirt bikes from entering the town. Don't worry, it is a very short walk to the depot and town site from the end of the trail. 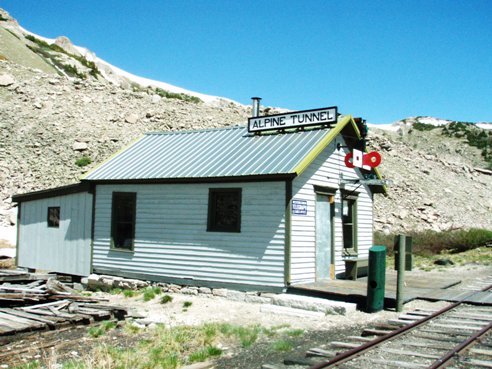 The Alpine Tunnel depot, is one of several structures at the old town site that have been restored. Several other structures including the Stone Engine House and Hotel have been destroyed by time and fire. Take time to go inside the depot and read all of the history. The historical information is very interesting and gives one a glimpse into how life was at the this area was in use. 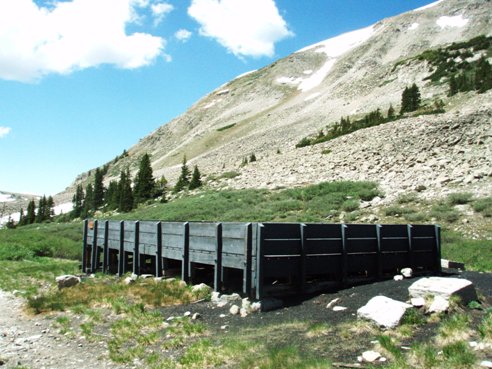 The coal bunker is still in good shape. I can't remember if was restored or not.